Kendall Jenner Flips Off Tyler the Creator at Coachella, See the Pics

Posted on: April 13, 2015
By: Stephanie Park
Featured Video
19-year-old Kendall Jenner shocked Coachella goers after she very publically flipped the bird to performance artist Tyler the Creator during his Saturday night set. It all started when the 24-year-old rapper took the stage and called out Kendall in front of hundreds of audience members.

Tyler the Creator drew attention to the VIP area that Kendall was dancing in. The rapper said, “Kendall Jenner here thinking she cute and sh-t,” and after that didn’t draw her attention he went on to say, “Hey, Kendall, Kendall, Kendall. I’m over here to your right, f-ck you!”

Kendall responded by giving Tyler the finger, much to the delight of audience members. Many were shocked by both Tyler and Kendall’s public feud, but it appears that it was all in good fun. 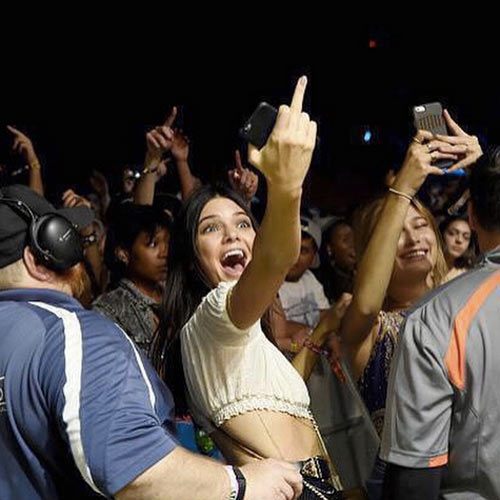 
Kendall retweeted a video of Tyler’s insult later in the night with an emoji and the caption “love.” Tyler also tweeted Kendall, “People really think I hate you hahahah,” which Kendall then retweeted to her followers.


Kendall has been having an eventful weekend. The model was also been spotted with her sister Kylie Jenner, fellow model Hailey Baldwin, and 21-year-old Justin Bieber at the three day music festival.

THE ATOMICS PERFORM LIVE AT H&M IN TIMES SQUARE FOR HUNDREDS OF FANS
H&M Loves Coachella collection: get the festival spirit with The Atomics

Gigi & Kendall take Victoria’s Secret
Do you have a Fashion story idea or tip? Email us at submissions@fashionone.com.